The History of the CCWC

A group of women, some of whom had never met before, came together to participate in a small group and study Johnette Benkovic’s Full of Grace Study Series. What initially brought these ladies together was a desire to learn more about and actively live their Catholic faith. Growing in friendship, they began to ask themselves how they could make a difference. There was already a growing Columbus Catholic Men’s Conference, but nothing for the women of the area. As the weeks went by, they felt called to start a small, local conference for women. The group began with the goals to bring women together and foster appreciation for the Catholic faith, Church and Sacraments. They also wanted to create an opportunity for fellowship with other women around the diocese that would extend beyond the day of the conference. That first group of ladies came to memorize Romans 8:28 as their inspiration: “We know that all things work for good for those who love God who are called according to His purpose.”

Through much prayer, discernment, and work, the Columbus Catholic Women’s Conference was born. The first conference was held at St. Andrew’s Church in Upper Arlington on February 16, 2008. Johnette Benkovic and Karen Reinhart were the first speakers. The reaction was incredibly positive and the conference continued to grow, eventually moving to the Ohio Expo Center where it continues today.

Throughout the years, we have been blessed to present such wonderful, nationally-known speakers as:

2023 will be the 15th Columbus Catholic Women’s Conference! Along with some of the most sought after Catholic speakers, the conference also invites many organizations and vendors to attend, all with the aim of providing women with ways to continue celebrating and learning about their Catholic faith. In addition to our speakers, the CCWC offers Mass, Confession and Adoration, with the help of Bishop Earl Fernandes, many priests and deacons, and the Diocese of Columbus. We rely upon and thank our many generous sponsors and The Catholic Foundation to sustain us financially.

We pray that you will join us at the conference in fellowship and celebration of our Catholic faith. We also pray that you will bring your girlfriends, your sisters, your mothers, or those that the Holy Spirit has revealed for you to invite. In return, we ask that you might please say a prayer for the volunteers and women who work tirelessly to put on an event of this magnitude.

The mission of the Columbus Catholic Women’s Conference is to provide opportunities for women to deepen their relationship with Jesus Christ, to grow in their realization of their dignity as Catholic women and to strengthen their commitment to be a disciple of Christ.

The leadership of the first CCWC:

The current board of the CCWC,  Allison Arend, Michele Ellis, Michele Faehnle, Karen Szolosi and Michele Niklaus want to take this opportunity to recognize these women of the original leadership team, but also the hundreds of women that have made the conference possible throughout the years. Without our volunteers and host parishes (every two years we ask a parish to be our main source of volunteer resources), the conference would not happen. Thank you all for saying “YES!” 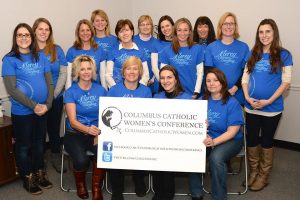